One of the best-known Christmas songs in the world started out as a Thanksgiving song! Not surprising, since the lyrics to "Jingle Bells" never once reference Christmas, reindeer, or a certain fat, jolly man with a white beard and a red suit.

In 1832, little Jimmy Pierpont of Medford, Massachusetts, was sent to boarding school in New Hampshire, where he wrote to his mother about riding in a sleigh through the deep December snow. In 1850, when his father asked him to compose a jingle for Thanksgiving (13 years before it would become an official holiday) James recalled what fun he had sledding as a boy and penned what he called "One Horse Open Sleigh." He would officially publish the song in 1857, and again, two years later, re-christened as "Jingle Bells." 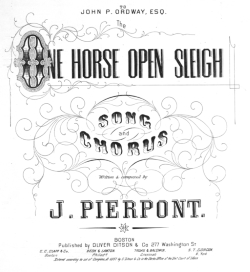 The song was not an immediate hit and was considered racy for its time. The little-heard second verse scandalously describes a young man riding his sleigh unchaperoned with Miss Fanny Bright until they get "upsot." The double entendre of their ride being capsized -- presumably because they were drunk -- turned the ditty into a drinking game before it would become the classic Christmas carol we know today. 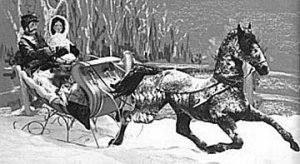 A much later, uncredited change to the melody also helped the song gain popularity. Originally, the chorus followed the chord progression of Pachelbel's Canon. That version of the tune eventually found its way into another Christmas song, "Jolly Old Saint Nicholas," by Benjamin Hanby, composer of the better-known "Up on the House Top." Jim Pierpont never made much money off of his most enduring song, but his nephew, banker J.P. Morgan, would become one of the richest men in the world.

Flash forward to NASA's 1965 Gemini 6 mission when astronauts Tom Stafford and Wally Schirra reported an unidentified flying object leaving the North Pole. It being close to Christmas Eve, they quickly realized they had spotted Santa's sleigh from their space ship and proceeded to play "Jingle Bells" on harmonica and sleigh bells, making it not only the most popular Christmas song on Earth, but the first song ever to be performed in, and broadcast live from, outer space!