Christmas is exactly ONE MONTH AWAY!!!

Celebrate this milestone with an excerpt from my mother's short story, How I Met Your Father, when my dad, then known as Kris Kringle, gave Mom and her friends a ride home from a party. 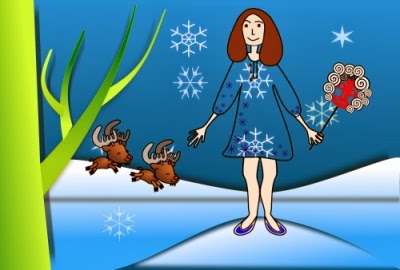 His carriage was drawn not by horse, but by two strong caribou. Kris handled the reins with skill and gentleness, as if politely asking the animals for a favor, and the bucks merrily complied.

I was the last to be dropped off. Still struggling to overcome my fear of speaking to this alluring man, I directed him to my home in mumbles.

“Why don’t you sit up here, with me, m’lady, so that I may better hear your instructions?”

“I do not believe that would be proper, Mr. Kringle,” my mouth said, as my mind continued to mull over the prospect.

He steered the reindeer up the hilly road. The moon shone brightly as we continued on in silence. A stiff wind blew through my auburn hair and, as if struck by a sharpened moonbeam, I suddenly found myself hopping into the front seat like some uncontrollable monkey.

“Well,” said Kris, with a chuckle.

I looked into his eyes, assaulted by his very beauty, and managed to choke out, “I have changed my mind, Mr. Kringle. I am told it is my privilege as a lady. Drive.”

He flicked his wrist ever so slightly, clucking his tongue twice, and the deer sped off. The carriage wheels seemed to seek out immense bumps that jostled me on the seat until the distance between me and Kris could be measured by a caterpillar. My shriek turned into a laugh and I made no attempt to remove myself from his warm side until we neared my home.

When we stopped, the dead silence of the still night air enveloped us in awkwardness. He flashed a smile upon me and I felt as though I had witnessed a shooting star dance across the sky. “I would very much like to sculpt you, as I did your friend, Carol.”

My heart skipped a beat, then raced to catch up. “Why do I not see you in school? You are but a year older than I. Do you already know everything at seventeen?”

“Ho, ho, ho! Hardly, my dear. Alas, my family cannot afford to send me to high school, on account of the crippling taxes collected by the rascal Arthur Goody. So I am homeschooled.”

My mouth went dry. My father? A rascal? Depriving this kind and generous man—who happened to possess a form not unlike your average Norse god—of a basic education? Forsakes, what if Kris were to be made aware the rascal was of my blood? Should I tell him now and spoil the moment for whatever it was or might be in the future?

Before I could utter a word, Kris handed me a bundle of some sort. “Please, take this,” he said, his voice warm like a pleasant cup of tea.

I unwrapped the paper to reveal a nutcracker unlike any I had ever seen. Instead of the usual king or palace guard, I held in my hands a beautiful fairy angel. She wore a white, silken dress, and even without paint, her wooden face had the appearance of fine porcelain. “She’s gorgeous,” I sputtered. “I don’t understand.”

“My address is on the card.” He smiled at me again, and I felt a strange warmth cover me everywhere. “Call upon me, if you wish.”

I removed the tag from the fairy’s wand, stuffing it into my pocket without so much as a glance. Then I ran inside, a bundle of nerves, forgetting to thank him for the ride, the wrappings drifting to the curb in my wake, the magical nutcracker clutched tightly to my bosom.

Breathing normally again from the safety of the other side of my front door, I found my father waiting up for me. Not angrily, for I had not stayed out past the agreed upon curfew, but for the sake of simple fatherly concern over the safety of his young daughter. He put down the book he’d been reading, came over to hug me, asked if I’d had a good time at the party, then quizzed me on my peculiar new toy.

“Where in heavens did you obtain this thing?” he asked.

“At the party. From a friend of Carol’s.”

Poppa moved the lever up and down, carefully examining the mouth as it opened wide, then shut tight. “That Kringle fellow?”

“He’s an odd one. Drives around with reindeer pulling his carriage.”

“I don’t think his family can afford a horse,” I said, before remembering who Kris had blamed for that.

“And just how much did Mr. Kringle charge you for this handiwork?”

“Hmm.” He rubbed his chin and stared harder at the nutcracker.

“Is something wrong, Poppa?”

“Funny how a boy of such destitution can afford to buy gifts for young ladies he hardly knows.” He carried the angel across the room.

“Oh, but Poppa, you are mistaken. Kris made this doll of his own hand.” I pictured Kris’s nimble fingers shaving small curls of wood off the inanimate object, bringing it magically to life.

“That makes him all the more odd then, in my book. Why give things away when one can easily command a decent price for his wares? For then his father would no longer be delinquent in his payments to the state. His Majesty, my boss, would say the Kringles deliberately avoid an income to shirk their duty to the crown. I am afraid that assessment may not lie far from the mark.”

I flashed back to the day I'd seen Kris at the toy shoppe. Poppa’s queries began to make some sense. Why did Kris hand his toys to those children when he could just as easily have sold them to the shopkeeper for a nominal fee, who could in turn have sold them to the boys and girls for a small profit?

“At any rate, we don’t accept gifts from strangers now, do we?”

I became so lost in the memory of a kind of glow that I’d noticed surrounding Kris as each child’s face lit up, that I scarcely noticed Poppa toss my present onto the fire. I could almost hear the lifelike figure cry out in agony as he pushed her deep into the flame with a poker. I nearly burst into tears myself, but somehow stopped when my tips of my fingers found the card with Kris’s address nestled at the bottom of my pocket.

“There, there.” He put a hand on my shoulder. “No harm done. Just remember to keep your distance from the lad.”

Well, I bet they hooked up eventually, or I would never have been born! To find out what happened next, read the complete short story and more in North Pole High: Beginnings. 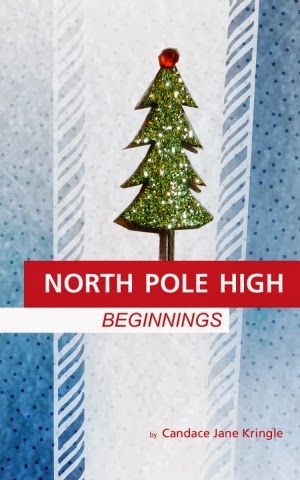 You can still get the ebook for free through the end of November using the coupon code posted earlier this month, or for just 99 cents at Amazon and now at Barnes & Noble too!